Reflections on travel in Kenya

We experienced a range of travel during our stay. I thought it might be useful and interesting to share some of our experiences here.
Most locals in Kenya rely on walking to get from one place to another. It is common to see them carrying huge loads - in the case of women, on their heads. (I gave rise to considerable amusement two years ago by carrying a box of solar lamps on my head - though I was not able to do so without holding on to them. I was astounded to see a woman carrying one of the sewing machines I gave out on her head.) 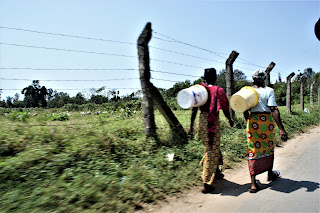 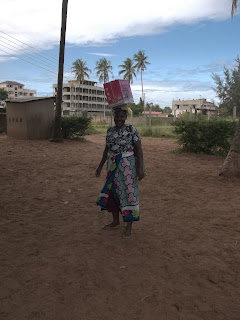 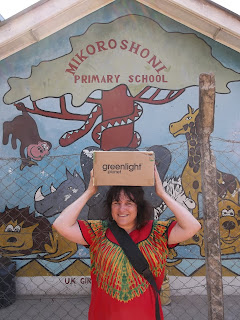 Some men and occasionally children ride bicycles. Women do so very rarely. Vast loads are carried on the backs of these cycles.
For those wishing to travel further, a boda boda ("border to border") or motorcycle taxi is a common form of transport. These are commonly seen clustered together at the corners of streets. Although it is apparently a requirement that a helmet is worn, we saw this only rarely. 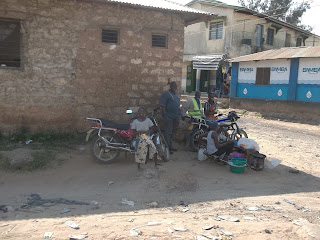 The equivalent of a bus is the matatu. These minibuses are now much more strictly regulated than in the past, and are only allowed to carry the number of passengers for which there are seats. They travel on specific routes and are painted very individually. Their drivers are extremely aggressive in finding space to drive on the crowded roads. 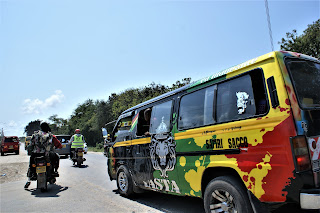 A tuk tuk is a step up from a matatu. Three can sit with in these vehicles (two comfortably; I have been in one which carried six!) and I really enjoy riding in them. Like matatus, however, their drivers are assertive in finding space on the road - even when it does not really exist. 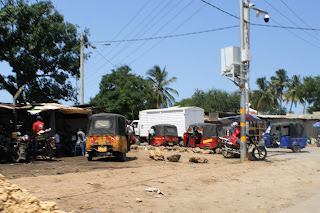 There is a growing number of private cars on the road, and we were fortunate to be given lifts by Susan to save us having to arrange other types of transport.
Roads are single lane officially, but thanks to matatu, boda boda and tuk tuk drivers using the verge and the centre of the road, often manage to hold six lanes of traffic. Apparently (and borne out by our experience) taxi drivers are the safest.
A lot of freight is carried by lorries, but the new Nairobi to Mombasa railway is changing this. The railway carries two passenger trains in each direction (on fast stopping only at each end of the journey and one slow stopping at every station) each day. We travelled this way several times. A four hour + journey from Nairobi to Mombasa costs only around ten pounds per person. Security is very tight (we and our bags were checked twice at each station) and it is now essential to buy tickets in advance, though this cannot be done online. 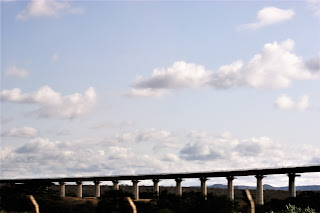 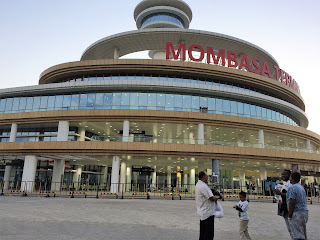 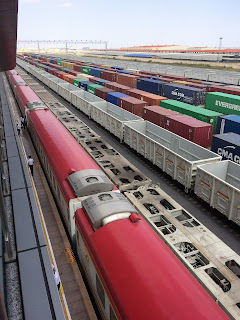